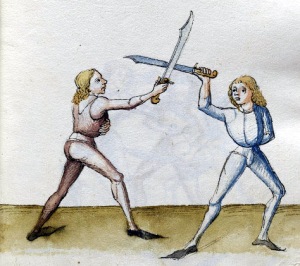 In this list the reader may find an overview of selected workshops held at national and international events. This list does not cover all the workshops, in fact it only holds very few of the lot. The list is limited to what I found remarkable because of the content. You will probably miss the workshop you participated in. Do not think I did not like to be there. I enjoy every one but I can’t list them all.
You find the latest at the bottom of the list.

Fighting with the long knife

A full weekend workshop on the Langes Messer in Frankfurt 2010

The “Langes Messer” was used as the solely training weapon for single handed fighting in the 14th and 15th century. To understand and use this weapon we must have a deep look into the fencing book of Hans Lecküchner. This workshop was designed to get an understanding of this weapon. It will help to start regular classes on this weapon and a good interpretation of the sources.

Workshop on the one handed spear and shield (small pavese) at HEMAC Djon 2013, and Mitsommerfechten Krefeld 2013

The workshop will teach the differences between lance, spear, and javelin in guards and usage. Fencing with the javelin and the shield will be demonstrated and trained in depth in partner and solo drills. Furthermore there will be the chance to test the new knowledge in the application of fight groups and lines.

Langes Messer – The Right shall be the enemy of the Left

Not only the point or the edge of blade is a dangerous. Using everything on the weapon but not the edges will tech the participants to understand the features of their weapon. A blade can be used to parry with the flat (based on the cgm582 35r etc), especially a Messer can be used to catch the incoming blade with the flat and nail (based on Wallerstein 29r or Dürer Dürer 61.30 etc). Hitting with the pommel is a good idea in close combat to avoid wrestling, but the pommel is good for wrestling as well (based on cgm582 171v etc). Even the forearm of the weapon hand can be used to control the blade of the opponent.

Like in wrestling the rest of the body can be used as a weapon as well. Most interesting are attacks that are done simultanously with the blade and the body. There are evil knee breakers from various sources (like cgm582 95r and in 1467 Talhoffer, Cod. icon 394a 235) and a lot of left hand work from cgm582 including arm breakers etc.

Scorpions, Stork, and the Basilisk are the favorite beasts of Hans Lecküchner. While the beak of the stork seems to be a simple technique, the Scorpion and the Basilisk are some of the most sophisticated things in his 414 plays (not including all the breaks and counters) volume. To apply them in a sparring or free fight needs a lot of training and the tactical ability to lure the opponent in the situation needed. For many fencers to learn the movements and bring them in a good speed is already challenging enough. The way the weapon is moved here will surprise most of the fencers. There is much to learn from the beasts of Hans Lecküchner.

The Messer fighting of the Glasgow Manuscript

Workshop on the Messer plays in the Glasgow E.1939.65.341 at the Barcelona Historical Fencing Meeting 2014

Every piece of fencing is based on mixture between fear and the eagerness to finish the game. There is always the wish to attack the other one and the fear to be beaten.

The Messer plays in the Glasgow E.1939.65.341 manuscript are a perfect introduction to the practical application of the Messer. They teach the footwork, the specialties of the weapon, and how to use it in situations like duels, war, or self-defense.

This workshop is a practical fast track to the weapon called Langes Messer.

Hans Lecküchner created one of the biggest volumes on fighting in his treatise of the weapon called Langes Messer. It contains pieces of shield fighting, fighting with any single handed weapon from a dagger to the rapier, and wrestling. This all systemized into the categories of Master Liechtenauer. Already in the first chapter on the Zornhau the complete system is explained.

The workshop will explain the main concept and principles of the German masters with the methods of Hans Lecküchner.

Behind the Obvious of Talhoffer’s Langes Messer

Cryptic speech and secret languages are found very often in the 15th century and especially in fencing books. The Liechtenauer verses directed to the same young nobles are mostly not to understand without the glosses. Talhoffer himself insists in teaching his clients secretly in more than one book (e.g. “das sein haimlichait niemen erfar” Hs. XIX, 17–3, Königseggwald).  At this workshop I presented the the obvious solution (identical with the common interpretation) and a highly sophisticated interpretation, that somehow matches much more the words and images. Sometimes the things seemingly more complicated are even more effective than the obvious simple solutions. The interpretations of the hidden meanings are solidly based on the teaching found in other Talhoffer manuscripts and on the Messer of Hans Lecküchner. They are perfectly applicable in sparring and a fight.

The workshop is based on a article series starting here: 1. Fighting with the Messer [Plate 223, page 113r]

Aristotle states in the Peri hermaneias that there are certain logical relationships between the four kinds of categorical proposition. These relationships became the basis of a diagram originating with Boethius (6th century). In the so called “Liechtenauer System” those “opposites” form a fundament that is common to most European martial.

The symbolism of “Liechtenauer System” of five words originates from the quarternity of the four evangelists with the agnus dei in the middle. This image of numerology with four elements surrounding a fifth is often reflected in the Liechtenauer System by the four “Hengen” and the “Langort”, the four guards and the five strikes.

The lecture will illustrate the origin and the understanding of the opposites in the Liechtenauer System. It will further show how these where used to teach fencing and how to win a fight.

The lectures will document how we can use it as a method not only to understand the historical sources but to teach fencing in a modern and at the same tame historical way. This method had been reviewed and tested in a workshop by Torsten Schneyer, Stalhakademie Leipzig, at the Treffen Historischer Fechter Mitteldeutschland in Nordhausen.

Applying the Five Words of Liechtenauer in learning, interpreting and fighting with Lecküchner’s Langes Messer as they are named by Hans Lecküchner:

The workshop will introduce the diagram of the five words and will teach the participants how to use it in daily training, research, and in fighting.

This will be done by selected plays of Lecküchner’s Langes Messer. Those will be picked from the five/six strikes:  Zoren / haw / vecker  / Entrust : hat zwinger / gefer mit / vincker

The workshop is linked to the lectures and will practically demonstrate, what had been presented before.

A roundtrip on the art of fighting with the weapon of choice by the fencing master Hans Lecküchner. It included fencing in all distances up to wrestling. It was a challenging workshop for the beginners in historical european martial arts and an enlighting workshop for experienced participants to promote the art of Messer fencing as a basement for a complex martial art. Goal of the workshop was to awake a broader interest in this kind of fencing in the Netherlands and Belgium. This was successfully achieved with the first international Messer meeting in Utrecht 2017.

Medieval Streetfighting (with the Messer)

A workshop of unequal matched weapons at HEMAC Florentia 2015

Self-defense against a superior armed opponent requires great bravery and total commitment to break joints, bones, hurt the attacker so much that he cannot bring forward any more attacks, regardless if the attacked is stabbed once, twice, or not at all. The enemies in a “real” fight are numerous, it is not the alone the man with the weapon. There are shock, fear, adrenaline rush, freeze, pain, and many more enemies. Training to overcome at least some of those enemies will level up the chances, nothing more, nothing less. But sometimes it’s enough. This workshop will have a look how medieval partly armed people defended themselves against attackers with weapons.

Liegnitzer Sword and Buckler (with the Messer)

A workshop at HEMAC Dijon 2016

The treatise of Andreas Liegnitzer on Sword and Buckler is a very short one. It contains only few plays and seems to fit perfectly in every workshop. But in fact it is a complete set of all the 5 strikes plus the 4 Versetzen, the Krieg, the Winden, the Blössen,  the Wunder, and bridges to his treatise of wrestling, dagger and shortened sword.
This workshop will offer you a new viewpoint in Liegnitzer’s teaching, that will change your way to fight with buckler and sword.

A workshop at HEMAC Dijon 2017

Hans Talhoffer distributed his fighting lore in multiple books. None of the books is complete. But all together forma a fantastic and deep art of fighting. His teaching of sword and buckler is strewn in at least 3 books, and hidden not only in plays with said weapons, but in Messer, Dagger, and even in sword against a steel hammer. The fancy play against two attackers is only to understood if you have two of his books at hand and have understood his horse fencing plays. Talhoffer took his inspiration from mainly from Liegnitzer and I.33 alike source. If he had a copy of the latter at hand or not is pure speculation. 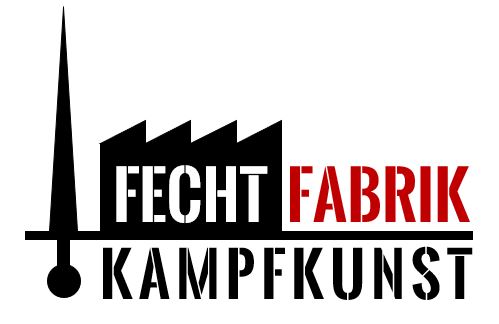