In the beginning of the Codex 5278, currently resting in the Österreichischen Nationalbibliothek, Vienna, there is a note of an historical event: an earthquake. This earthquake is dated to the 12th December 1428.

Anno domini M°CCCC vicesimo octauo dominica antte lucie (12.12.1428) Junker Heinrich (Henry) of Ramstein fought with the Spaniard named Johann Dermerlan (Juan de Merlo). There I teached Junker Heinrich of Ramstein and at the same night came an earthquake, such that folks fled from their houses. There came five, which I heard now speak loudly, that they were seven. There was Konrad Schirrmeister, 29 years old, the son in law of the Schirrmeister Bartholomäus, may God bless his soul. [1]

Was there really an earthquake in December 1428? And where did it happen. We know of the big earthquake in Catalan, Spain, on the 2 February 1428. The rose window of the Gothic church of Santa Maria del Mar in Barcelona was destroyed and many died. At that time the Catalan area was shaken by tremors since a year and it may be the case, that there had been further tremors later on. But the tremor was not in the Catalan region. In the book “Erdbebenkatalog der Schweiz 1: Band 1: 1021- 1680” there is the entry for that date but it is marked “not localized”. We can change that. The earthquake had happened in Basel. And that is why we know that. They fought a duel there.

The duel with the Spaniard 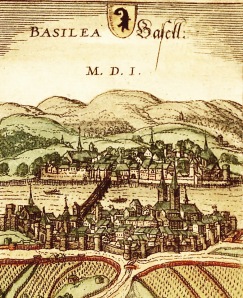 The author of that note is the teacher of the Junker Ramstein. And Heirich von Ramstein had a duel with the Spaniard Don Juan de Merlo. Juan de Merlo was the son of Alfonso de Merlo, Maestresala of Queen Dona Beatriz, wife of King Juan I. And this is the story of that duel:

In the year 1428 was a magnificent Spaniard, Don Juan de Merlo, Basel and he said boastfully: from Spain is my noble birth; hundred countries, a thousand cities have I seen, but not the man who dared to struggle a pass with Don Juan de Merlo. This annoyed the noble scorn of Heinrich of Ramstein, he threw down his glove, and both agreed, that every one had one lance thrust, and ought to do three blows with the Mordaxt and fourty blows with the sword. The day was determined, the judges were appointed, and many people flocked to the city. On the cathedral square the whole magistrate of Basel sat in full armor, all the noble knights and women from all over the country, citizens old and young were there. Judges had been Markgraf Wilhelm, Herr zu Rötteln, and Count Hans von Thierstein. The fight began, and was with such effort, power and art out that none of the other could gain advantage, but the Spaniard won the conviction that Henry of Ramstein could be a challenge for his knightly fame. [2]

This duel is confirmed by a Spanish book from 1505 [3]. In the Las Trescientas  the famous Spanish knight wins the duel.

“once when there was war between the two kingdoms of France and Castile, the famous knight Juan de Merlo went out of the kingdom and, in Bala[?], a village in the County of Brabant between Germany and France, he challenged and conquered a German knight named Enrique de Remestién; and another time in Arras, he conquered an important knight named Mosior de Charni.”

The opponent of the second duel was Pierre de Brecemonte (Beaufremont), Seigneur de Charni, and it took place in the city Ras in the Picardy with the Duke of Burgundy watching. Juan de Merlo is reported to have died 1443 on the border of the kingdom of Granada, according to the Commentory of Hernán Núnez. [4] According to an other source he died in Basel a few nights after the day of the duel, killed by a young noble who had mistaken him for a thief in the midst of the night.[5] As we know that the second duel in Ras took place 1433, this is certainly wrong. [6]

The rules of the duel say that every part has a certain number of thrusts and strikes. This seems to be common and even found in the festivities of later centuries (see Fullcontact – the Tournament in 1596). In Fiore we read of the “Giannino del Baio da Milano” who had a duel against a valiant German squire consisting of three thrusts with sharp-ironed lances and on foot three axe strikes, three sword strikes and three dagger strikes. How sharp and dangerous those duel and tournament weapons of the 15th century had been we do not know, but we know that the tournament weapons of the 16th century had been very dull and specially made for such occasions.

Like in the GMN 3227a and many books of that style the Codex 5278 is full with a bunch of notes. There are alchemistic and medical receipts, the magic of numbers and names, the hardening of weapons. There is even a entry written in a secret language (163v).

There are not many names to find in that book:

Those names are probably not the authors of that book, they may have been owners.